The Ayala group has signed a deal to acquire a 60-percent stake in Air21 Holdings Inc. (AHI), the logistics enterprise founded by businessman and former Customs Commissioner Alberto Lina, as part of the conglomerate’s plan to build a formidable end-to-end logistics backbone. 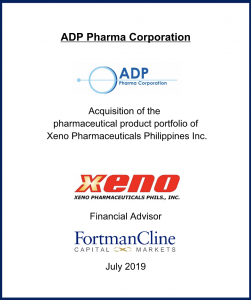 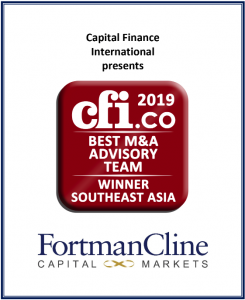 The judging panel at Capital Finance International, headquartered out of London,
granted Fortman Cline with the Best M&A house award for Southeast Asia. The
award is in recognition of the firm’s niche in the entrepreneurial and owner-manager segment of the market.
The award also recognized Fortman’s success as evidenced by over US$16 billion of transactions
advised since its inception in 2007 and its position as one of the top five financial advisors
in the region. Outstanding client care and a highly engaged and motivated workforce have also been a strong
attribute of the firm. The firm treats its clients like partners, which serves as a basis
for sound fiduciary counsel. 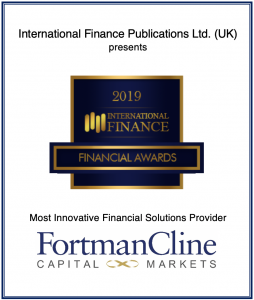 The International Finance Magazine awarded Fortman Cline with “the most
innovative financial solutions provider for the Philippines.” This award for 2019
was in recognition of Fortman Cline’s problem-solving approach in dealing with
clients. Fortman Cline has been recognized for formulating and executing tailor-made
solutions for clients facing complex issues ranging from acquisitions and post-acquisition
integration, acquisition financing, mergers and strategic partnerships,
recapitalizations, corporate restructuring, divestment and dispute resolution. The
firm has gained a brand identity as an independent adviser that provides
unbiased and objective deal assessment and advisory work.

International Finance’s Financial Awards aims to reward and recognize the contribution of financial companies, which include path-breaking initiatives in corporate social responsibility or charitable activities, corporate governance and activities that benefits the global finance community, in addition to their outstanding performance in their respective fields.

At the recently concluded International Finance Awards, Fortman Cline Capital Markets Limited was recognized as the Most Innovative Financial Solutions Provider in 2019. 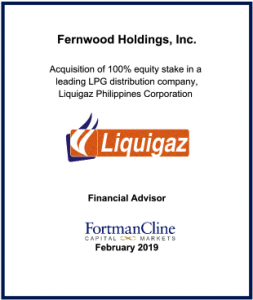 Fernwood Holdings acquires Liquigaz Philippines from Cosco Capital Inc., the listed retail holding company owned by Lucio Co. Cosco disclosed last October 2018 that it was exiting the LPG business, noting in a statement that the divestment “will allow the firm to maximize shareholders’ value and achieve financial flexibility moving forward.”

Liquigaz Philippines is the second largest supplier of LPG in the country accounting for about 30 percent of total market volume and is the biggest seller in Luzon.
More than 60 percent of the country’s annual LPG importation is unloaded, stored and sold from Liquigaz’s 12,500-metric-ton capacity storage tanks in Mariveles, Bataan, the largest of such facility in the Philippines. It is the only supplier capable of receiving both refrigerated and pressurized LPG cargo.

The transaction was subject to approval from the Philippine Competition Commission (PCC). In January 21, 2019, it was announced that the PCC approved Fernwood Holdings Inc.’s 100% acquisition of Liquigaz Philippines Corp, stating that the deal would not likely result in the substantial lessening of competition for the bulk and cylinder supply of LPG in Luzon. 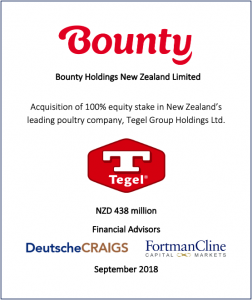 Bounty Fresh, the poultry company founded by low-key businessman Tennyson Chen, has received regulatory approvals for its $309 million acquisition of the Tegel Group, removing the last hurdle in the completion of the transaction.

In a disclosure to the New Zealand Stock Exchange, Tegel said it has already received the approval from the Overseas Investment Office, the agency regulating foreign direct investment into New Zealand.

With the offer approved, Bounty as the holder or controller of over 90 percent of Tegel shares now becomes the dominant owner of the company.

The transaction by Bounty Fresh marks yet another global acquisition by a Philippine company.

It came at a challenging time for the New Zealand company amid a glut in domestic chicken supply.

The bid was part of Bounty’s expansion strategy outside the Philippines.

Bounty Fresh was founded in the 1980s by Chen who started the business in a one-layer house in Sta. Maria, Bulacan with an initial 5,000 heads of chicken.

From a 5,000-head layer farm, the business grew to be one of the largest broiler integrators in the country.

Today, it is the only fully-integrated poultry company that has continuously invested in company-owned facilities.

It is the first company in the Philippines to put up a single-stage commercial broiler hatchery, a technology that ensures better hatchery sanitation with controlled ventilation that will in turn produce better chick quality.

To cater to the consumers in the various regions and islands of the archipelago, Bounty Agro Ventures Inc. was integrated to operate in several branches across the country.

Bounty is now one of the largest poultry companies in the Philippines with vertically integrated farm-to-plate operations.